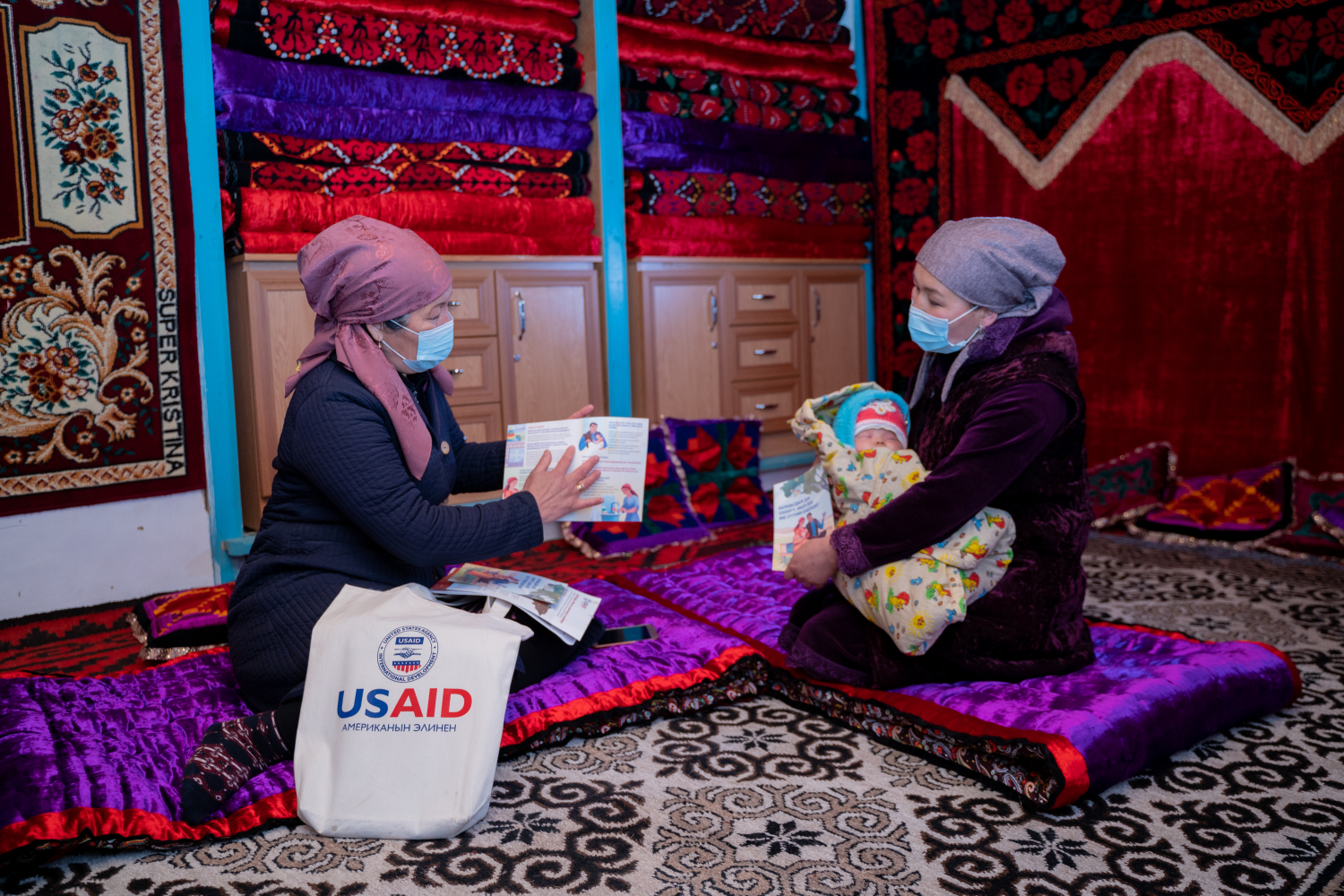 To share achievements and surprising new survey results from USAID Advancing Nutrition’s first year in the Kyrgyz Republic, the project conducted a virtual reflection and launch meeting on March 16, 2021. The meeting was organized in three languages and included approximately 100 participants, from the Deputy Minister of Health and heads of regional administrations to representatives of development NGOs and local activists.

The project presented results from its recent baseline survey, which focused on nutrition practices that impact the health of mothers and children in Batken and Jalal-Abad Oblasts (regions). During October‒November 2020, the project interviewed more than 2,000 mothers of children under 2 years covering issues like breastfeeding, anemia prevention, dietary diversity, and hygiene.

Deputy Minister of Health Nurbolot Usenbaev noted that USAID Advancing Nutrition’s work in the Kyrgyz Republic is especially important, as “every third woman and every third child suffers from anemia in the country, and the problem of malnutrition remains actual in the distant regions.” He thanked the project for the productive first year and reassured his and the Ministry’s support for the project’s activities in the country.

The baseline survey produced several surprising results. It revealed that only 18 percent of children aged 6‒23 months in Batken Oblast consume a minimum acceptable diet. Only one in two children were exclusively breastfed in the two oblasts, similar to the national average; however, the proportion of infants breastfed within one hour of birth was markedly lower—just 63 percent versus the national average of 81 percent.

Among other outliers were the percentage of children exposed to consuming sugary or processed foods (86 percent in the two oblasts), and the share of mothers washing their hands at least three out of five critical times, which was 23.5 percent on average in both Batken and Jalal-Abad Oblasts. On top of that, almost 90 percent of survey participants reported that their children aged 6–23 months had eaten some kind of junk food in the past 24 hours.

USAID Advancing Nutrition is already addressing some of these issues by informing mothers and families about the importance of a healthy diet, hygiene, and sanitation. Last year, the project virtually recruited and trained more than 2,000 activists to support community outreach for these important issues. The activists reached over 17,000 households, or more than 52,000 community members, in the project's target areas. The results and insights from both the survey and the virtual meeting will help identify future points of entry for project implementation. Learn more about our work in the Kyrgyz Republic.

Join the Innovation Lab for Nutrition and USAID Advancing Nutrition for a webinar series to hear about the Lab's research, results, and learning to inform future programming.

Designed to inform and engage stakeholders, this series will cover research conducted by the Innovation Lab for Nutrition and its stakeholders over the past ten years. During each webinar, panelists will present findings from their research, discuss policy implications of these findings, discuss what needs to be done to better link research to practice, and identify research gaps for future consideration.

There are currently no upcoming events. Please check back in the future and follow us on Twitter for announcements.